Anatomy and physiology of the red worm 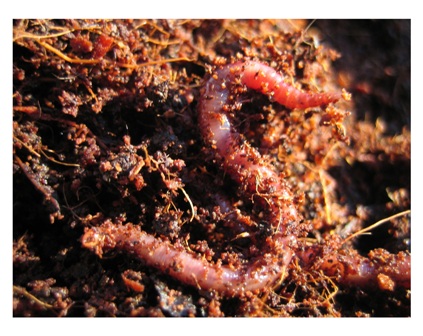 The worm is classified in the animal kingdom as a terrestrial Annelid, Class Oligochaeta. It lives in humit areas, shuns the light and feeds on organic waste decomposing plants and animals and is an excellent recovery.

Today there is about 8,000 known species of earthworms, but only 3,500 of them have been studied and classified.

Although any terrestrial worm can be used as a vermicomposter, the recommended worm in vermicomposting is theCalifornian red worm, or Eisenia foetida. The reasons behind this specific choice of the specie is due to:

• Longevity: lives about 16 years.
• Although it is hermaphroditic and can not self-pollinate, it is very prolific.
• It is very voracious, each individual ingests daily an amount of organic material equivalent to its own weight (about 1 gram in adult individuals).
• Their droppings, the vermicompost, it is up to 60% of their daily intake and it is a high quality product.

The red worm normally lives in warm climates. Their body temperature ranges between 19-20 º C. It is dark red, and his body is divided into rings or metamerisms, which are visible at naked eye. They measures about 8-10 cm long and 3-5 mm in diameter.

The earthworm respiratory system is very primitive and the exchange of oxygen is carried through the skin.

The circulatory, nervous and excretory systems are also distributed in different rings. Thus in each ring there are 5 pairs of hearts and a pair of kidneys.

For dining, the worm sucks food through his mouth, which is called a proboscis. When it reaches the stomach, special glands secrete calcium carbonate, which neutralizes the acids present in the ingested food.

The muscular system is well developed both in longitudinal and in circular motion, allowing the animal to make any kind of movement.

The worm moves by crawling on the ground, using special rings, which are able to "dig" in the field. To move on, the worm sets the last part of his body rings on the ground, shrinks the rest of the body toward the front (towards the mouth), then the rings fixed later release the previous rings, pushing back the front body to start the forward motion. At this stage is when they open their mouth and suck the food which, after traversing the entire digestive system, is expelled through the anus, located at the end of the worm.

U.V. rays could kill worms in minutes and for this reason, earthworms are Photophobic. They have special cells placed along their body, which warn of the presence of light, allowing them to flee in the opposite direction.

Each worm is equipped with a male genital tract and female genital apparatus. The first is at the front, near the mouth, and the female is placed a little backwards.

Copulation takes place every 7-10 days. In the coupling phase, two worms rotate in opposite directions from each other, so they can contact the genitalia of the male, with the female one. Thus receive the sperm and detain him until fertilization.

Fertilization takes place through the clitellum, a wider white ring set in the front of the worm, which is present in all adult worms. Clitellum glands produce a capsule called spermatophore, which is yellow-green and about 3-4 mm in size, pear-shaped.

After 14-21 days of incubation, depending on environmental conditions, the little worms emerge from the capsule, which has already acquired a darker color, producing between 2 and 21 white worms which are about 1 mm long.

From the moment of his birth, the worms are self-sufficient: they eat alone and only need the substrate to be moist and tender enough for their little mouth.

At 15 days, earthworms measure 12-15 mm and have a pale pink color. After 90 days the worm is already dark red, and has clitellum, which indicates that it is sexually mature, their length is about 3 cm. At 7 months, it has already its final size, about 8-10 cm, and weighs 1 gram until it dies when it is about 16 years old.

Depending on environmental conditions, food and care, a couple of worms can produce up to 3000 individuals annually, thus doubling its population every 3-4 months.

Physiologically, the development of the worms is influenced by various physical factors that are fundamentally: humidity, light, medium pH acidity, temperature and aeration.

Moisture and aeration of the substrate are closely related. On a soggy field, the water droplets move the air bubbles, and there is lack of oxygen and ventilation. Both factors influence food intake, respiration and reproduction.

For the survival of the worms, the humidity should be between 70 and 80%.

If the soil which is soaked with humidity above 85% has insufficient oxygenation. The lack of ventilation makes the feed intake decrease, and the worms enter in a period of latency, in which of course not vermicompost is produced, the breeding stops and the maduration time of capsules increases.

Humidity below 70% is an unfavorable condition. If the substrate is too dry, it is difficult to slip through the animal habitat and the animal food intake.

Humidity levels below 55% and above 95% are deadly to earthworms.

The temperature considered optimal for the worms development ranges from 18 º to 25 º C (their body temperature is 19-20 º C). When the temperature drops below 15 ° C the worms enter in a period of latency, reducing its activity. They can stop reproduction and growing, and spermatophores do not hatch until conditions are favorable.

In nature, earthworms move in the fields through the tunnels they dig, looking for the wetlands. Therefore, in periods of heavy rain, they are often found under stones, etc ...

The earthworm is photophobic (shuns the sunlight), because ultraviolet rays will kill the animals in a few seconds. They have sensors on the skin, to help them identifyng the source of light and flee from it.

On the other hand, direct sunlight increases the temperature of the habitat, reaching lethal temperatures if the animal has no chance of escaping.

The worm lives in substrates with pH 5 to 8.4. Outside this range, the worm enters a stage of latency. Acid pH in the substrate (<7) can develop a pest known in the world of vermiculture as planaria.