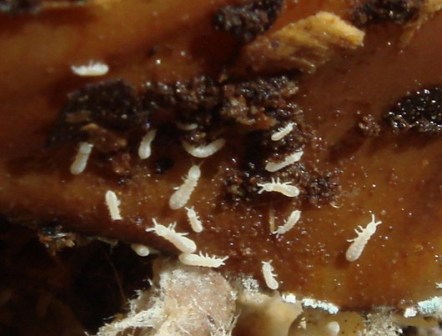 I found a very small animals, about two millimeters in the composter. Are they a pest? Causing you problems or earthworm composting process?

Here are some of the most frequently received in the Compostadores.com advisory service.

They are very primitive insects, most of which feed on decaying organic matter. In fact, along with the mites (and will discuss them in another article), are perhaps the most important macro-groups in the processing of organic matter in soil.

Springtails are abundant, but most of us do not realize its presence. As mentioned, living in the soil, and also about aquatic habits. Because they are so small (most of the species is less than 2 mm) go unnoticed. Under the morphological point of view are very curious. They have a specialized body to jump. It is a kind of glue called furca, carrying folded under the body and directed towards the head. Usually move by walking, but if something scares them, stretch this spring that catapults them out of danger. The jump is immensely large in proportion to its size. But apart from this peculiarity, have others. They have a kind of tube that arises from the ventral posterior to the legs of still unknown function. It has been speculated that it could serve to absorb water, help with breathing, or act as suction to allow fixed on a substrate. But in reality nothing is confirmed.

Anyway, these white critters, though small, stand very much for your color. As you can see is not usually elsewhere if they so common?

Of Collembola, there are many species. Most correspond to the characteristics mentioned above, and also have cryptic coloration.

What does that cryptic?

Crypsis means hidden. Agencies tend to have colors that make them difficult to see in their usual environment. In this way are not so easily located by predators.

So why is it white springtail?

These organisms belong to a highly specialized within the Collembola. Reside at some depth in the soil. At these depths, the light fails. Having a color is not free. They need to make pigments, and that costs energy and materials. Animals do because it pays dividends. As noted, are more likely to survive predators. If you live longer, your chance to reproduce. Therefore, more cryptic animals leave more offspring. That generation after generation, makes the animals more resemble more to their environment. But if a species lives underground or in a compost bin where there is no light, all that makes no sense. Moreover, devote part of their energy to produce substances that give color reports will not only advantages but drawbacks. Those who do not produce pigments have more energy available to devote to reproduction, and therefore favor the depigmented animals, ie whites.

I have never observed these springtails jump.

They do not. As we mentioned, are well adapted to living underground in the substrate. What benefit could have a jumper animal in these circumstances? None. For the same reason they are not colored, why spend part of their energy to make the jump a useless organ? These springtails have lost the ability to jump, and his jumper has degenerated organ. Something like what happened to our appendix bowel that has lost function and has almost disappeared.

But back to the initial questions are not any pests or worms threaten or impede the composting process, on the contrary, are among organizations that transform organic matter. As have jaws can chew the remains and reduce its size. Their droppings can be eaten by worms. However, its contribution is no less vermicomposter anecdotal given the number that are found, ie not too accelerates the process in this case.

Require very high humidity, and therefore, tend to accumulate in the tray for liquid or leachate from the vermicompost. They float in water and become visible when we fill the shower with leachate. Particular part of the ecosystem which is the vermicompost.