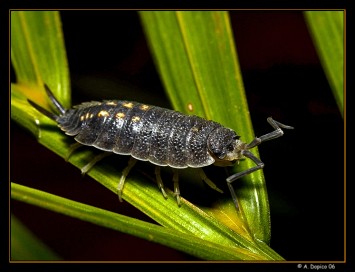 In the garden composters there is a common animal that everyone knows when being a child and playing with them: they are called the cochineals. Common names vary by geographic area, and therefore it is difficult to reach consensus on how to call them. Anyway, with description and images it is easy to know which organism we are talking about.

These gray organisms can grow up to half an inch long and an inch wide. Some species can be rolled into a ball and hide their legs and head. That's how they protect the softer parts of their bodies.

On the other hand, their bodies have seven pairs of legs, and two pairs of antennae, although a couple of these antennas are not very visible. Actually, they are crustaceans, ie relatives of crabs and shrimps. Like them, they breathe through gills, so they can live only in very humid places.

A curious aspect of their biology is their way of reproduction. The coupling takes place at night, making it difficult to observe. The male climbs on the female and caresses it with his front paws. After placing a hand under the arches of the female body and enter the sperm in the two genital openings it has (one on each side of the body). Then the male repeats the procedure on the other side. In the abdomen, the final part of the body, females have ventral appendages with a membranous expansions with the form a pouch. It is in this part of their bodies where they keep the fertilized eggs. The eggs hatch the young, which remain there until they make a few changes. A bit like a kangaroo pocket where they are raised. But, unlike kangaroos, they do not have a single child each time, but 5 to 80. They can also practice reproduction one to three times per year.

The dumbs are skin changes, or technical exuviae. Its skin is rigid and acts as a skeleton. This skeleton is external, unlike ours, which is internal. But as it is rigid and it can not be stretched, would not allow the animal growing. The solution is to break that old skin, which is now too small, and build a new, more in line with the new size of the organism. This dumb, or ecdysis, occurs repeatedly throughout the life of the animal, while it is growing. Another remarkable aspect of the woodlouses is that they do not change their skin at once, but in two separate parts in a few days, firstly the head and abdomen and then the chest. Therefore, it is not surprising to see some individuals with different colors between these body parts. After dumbing, they eat the old skin to reuse its components. They can live up to two years.

From a practical standpoint, the woodlouses are a very important part in the organic matter transformation process in nature. Like earthworms, as the red worm is used in the vermicompost, as well as decaying organic matter, they can eat their own excrements and other organisms. Thus, they take profit from the remains and accelerate their transformation, helping to make compost more quickly, and with a very good quality. They are not very demanding in the conditions they need to live in, needind only moisture and darkness. Both eat fresh remains as those with more time in the composter, which allows distribution throughout the content. They prefer plant debris, but can also eat animals.

They are, therefore, some great allies of composting fans!

They are completely harmless to other organisms in the composter, but have enemies inside and outside it. In the compost, the centipedes and some spiders can eat them. Out of the composter, hedgehogs, blackbirds, toads and even foxes can even feed from them.