The consequences of incineration 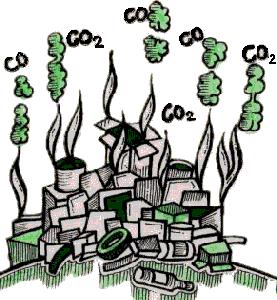 Incineration is one of the waste disposal methods most used in Spain, but just a little is known of this method both in Spain and internationally.

The truth is that, for the administration, incineration is considered a special regime energy source, because it is seen as a renewable energy and, therefore, receives a subsidy from the government. However, unlike renewables, which use reneweable resouces, incineration uses waste destined for disposal.

If you consider the cost difference between municipalities that incinerate their waste and the ones who don't, it is 19% higher for those who incinerate.

In Spain, 1.9 tonnes of waste are incinerated every year and the emissions of CO 2 generated from this waste are 1,629,000 tons. And that's counting only CO 2.

Apart from the economic and environmental costs (both affect us all) another recent factor should also be considered , as the number of workers on the waste treatment plant. The truth is that a recycling plant can generate up to 39 times more workers than an incineration plant.

In fact, the PNIR explains that waste disposal has to be reduced and prevention, reuse and recylcing have to be promoted, but the truth is that, in 2007, 86'7% of solid waste was treated by incineration or landfilling and 13'3% were recycled.

And then, what is the reason why we do not recycle? The reason is that an incineration plant is very expensive to build and maintain, assuming a transfer of 25-30 years, so that it becomes very difficult for to close without no financial consequences for the administration and the managing company . Thus, from the moment an incineration plant is built, the administration stops spending money for recycling by an average of 30 years.

To know in more detail what incineration involves we can consider:

However, the fact is that we must also take into account the environmental cost savings derived from energy creation and conservation of certain materials for the recovery of materials found in certain incineration plants.

However, and looking at all the data collected, in 2009 37'8 million euro were allocated towards incineration, which represented a negative investment for the environment, whilst they could have been intended to promote prevention, separate collection and recovery of waste material.

From Greenpeace, however, it is proposed to stop all the new construction incineration projects (between 16 and 18 for the next years), which increase by 70% the cost of incineration rates, eliminate the incineration especially regime, to provide information of this type of treatment to everybody, implementation of the system door to door, payment depending on waste generation and implement the policies of "0 waste", such as home composting where possible as a control measure for climate change and receiving subsidies from the government when "0 waste" is implemented.