What happens to my red worms? 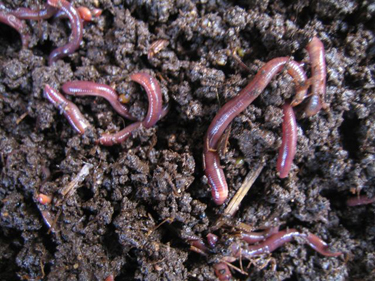 In this article the most common incidents that may affect earthworms and, consequently, the proper functioning of vermicompost will be explained.

HUMIDITY: worms breathe through their skin. To make this breathing possible, a correct proportion of air and water in the vermicompost must be provided. For the correct development of the worms, the humidity of our vermicompost should be around 80%. This is equivalent to the moisture that the soil of a plant has when it has been watered and has already drained the excess water, ie wet but does not look like mud. Humus particles should be loose, like coffee grounds. If the water content of vermicompost is higher, the pores through which the air should circulate are occupied by water. This bad air circulation has two consequences: first, the formation of inadequate odors and, secondly, the worms death. To remedy this, as we see mud content (as shown in the picture) and it starting to stink, we provide drying and structuring material. Drying material to absorb excess moisture, and structural material to make the content more spongy, with the aim to facilitate the movement of air. Coconut fiber, wood chips or natural sawdust (that has not been treated with paints, glues or varnishes), crushed leaves, or newspaper can be used. On the other hand, if we see that the content is too dry, we must moisten it. This is achieved either by increasing the amount of kitchen scraps incorporated, or depositing coconut fiber pieces or newspaper previously moistened with water. This lack of moisture can also result in the death of the worms.

TEMPERATURE: The optimum temperature for the development of our worms is about 22ºC. However, they can live from 5 to 35 º C. If out of this range, its activity can be affected as it depends on the outside temperature. As the temperature drops, the worms reduce their activity. Between 15 and 20 ° C they enter in a period of dormancy. They decrease the rate at which the remains are degradeed, and so does its reproductive rate. Below 5 ° C and adults can die, but not the egg capsules, which can survive and who do not hatch until environmental conditions are suitable. If the temperature exceeds 35 ° C also decreases its activity and may eventually die.

ACIDITY: The worms have calciferous glands that neutralize the acidity of the remains digested. Acid residues can be added to the vermicomposter to a certain extent. Adding more acid residues than those the worm can tolerate decrease its activity. The color of the worms tone changes to pink or white, and the area of the clitellum (bulging with approximately the height of the first third of body length) swells. To avoid this, add to the compost varied remains, including crushed eggshells. Thus, the acidity of some remains will be compensed by the others.

PROTEIN SYNDROME: Adding remains rich in protein such as meat or fish, or plenty of legumes, can cause a protein excess that can affect our worms, which transform the protein substances in, for example, ammonia, which causes the swelling of the worm's body at different points, and even their disappearance. Protein excess also promotes the growth of microorganisms that acidify the medium, with the consequences we have discussed in the previous section. The solution is no to add meat and fish scraps, and, as in the previous case, add variety of debris. We can see the remains we can add in the section:

WHAT CAN AND CAN NOT BE VERMICOMPOSTED?